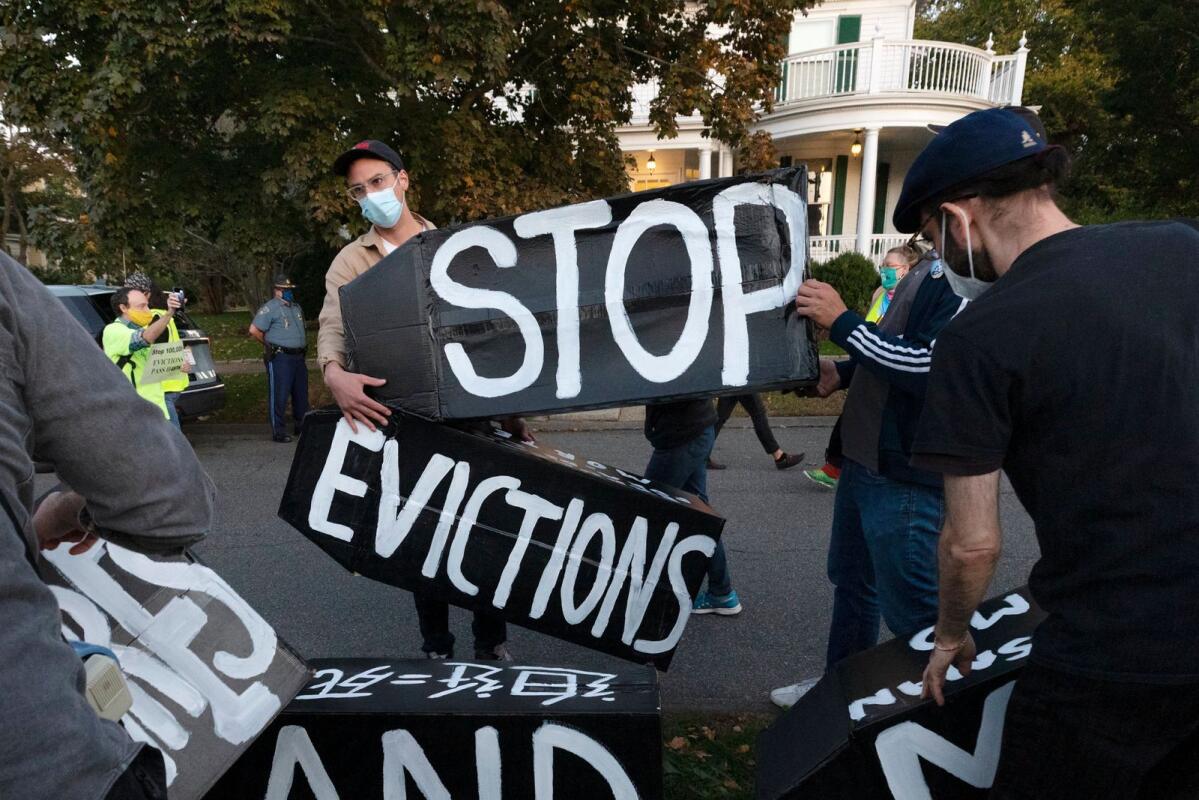 Activists erect a sign calling for a halt to evictions in Swampscott, Mass. A Cedar Rapids property manager estimates between 2,000 to 4,000 renters face eviction in the city now that the pandemic ban on evictions has expired. (Associated Press)

CEDAR RAPIDS — The impact of a Supreme Court decision blocking a temporary ban on evictions because of the coronavirus pandemic could lead to a spike in renters being forced out of their homes, though an Iowa Legal Aid attorney said the full impact may not be immediately apparent.

While renters faced a similar situation when the moratorium was set to expire in July, “we don’t yet know exactly how bad it will be,” Alex Kornya, general counsel at Iowa Legal Aid, said.

A Census Bureau survey found that 40 percent of Iowa adults in households not current on rent or mortgage were “very likely” or “somewhat likely” to face eviction in the coming two months.

In early July when the initial moratorium was set to expire, nearly 41,000 Iowans faced eviction or foreclosure, according to Census Bureau data.

Since September 2020, Kornya said, Legal Aid has seen a 140 percent increase in calls from Iowans fearing eviction, “and that surge has not yet abated.”

“We kind of went into emergency mode almost a year ago and remain in that mode,” he said. “The number of evictions is so high that we’ve had to cut back on some of the other types of cases that we would normally take.”

Although the number of eviction filings has been “somewhat muted” during the pandemic, Kornya has seen a general rise in filings in Linn County.

“We’ve been creeping closer to pre-moratorium numbers,” he said.

There are 171 evictions currently filed in Linn County that are set for hearing sometime in the next few weeks. That’s about 23 percent of the 730 evictions pending a hearing statewide, he said.

Typically, the number of eviction notices increases in the second and third weeks of the month, but Kornya said the U.S. Supreme Court decision Thursday night might trigger action by landlords sooner than mid-September.

Renters were anticipating the moratorium expiring in July, so they had an opportunity to prepare, Kornya said.

The Centers for Disease Control and Prevention extended the moratorium, but the court ruled the agency lacked the authority to do so under federal law without congressional authorization.

The impact of the moratorium ending will depend on what actions landlords will take and how quickly they act, he said.

“We’ve seen landlords who totally get it and who I would say are almost partners with us in trying to get the (rental) assistance system to work,” Kornya said. “It doesn’t make economic sense in many situations to forego the rental assistance, but we see a lot of that, too.”

Calls and emails to landlords and property managers Friday were not returned.

Legal Aid understands that landlords need to get paid, “not least of all to be able to make sure that tenants, our clients, are living in safe housing,” Kornya said.

“So as much as possible, we try to encourage folks to look at the issue that way,” he said. “It’s important to take advantage of all the resources available.”

Congress made $46.5 billion in emergency rental aid available, but the Treasury Department said only 11 percent of the funds have been dispersed to tenants facing eviction.

In early August, the Iowa Finance Authority said it had received 9,000 applications and assisted more than 3,000 households in 91 counties, providing more than $9 million in assistance. In Linn County, $1.3 million had been distributed to assist 506 households.