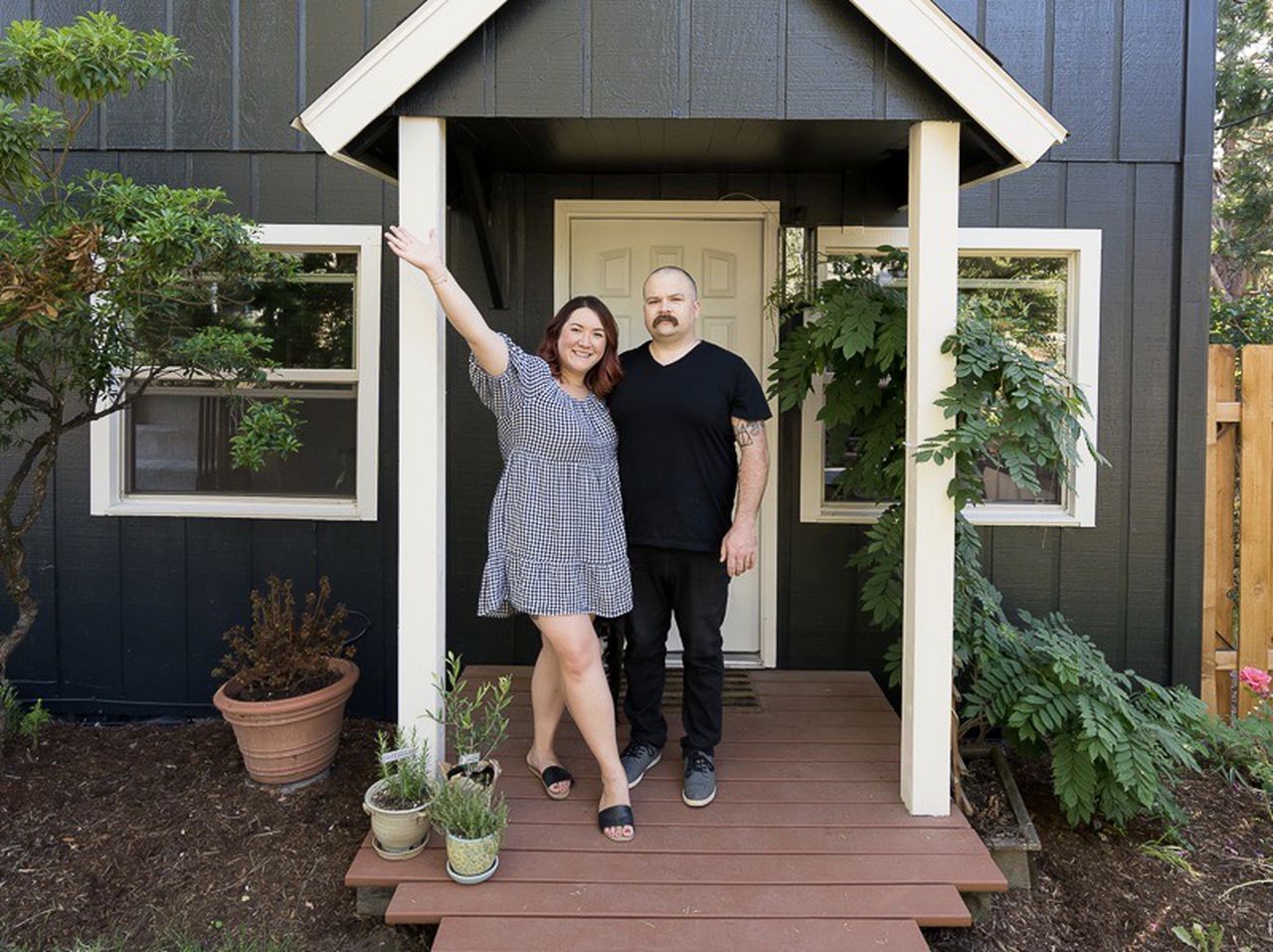 Whitney and Noah Barnes were part of a pack of home shoppers vying to buy a place in the Portland area just as inventory hit rock bottom in May. They had already struck out eight times. Then their offer, which wasn’t the highest price, was accepted.

What was their secret? Their real estate agent, Sophia Rosenberg of the Hasson Company, told them to be patient, even after six months of defeats, because the right home was waiting for them.

“I totally didn’t believe that until it happened,” said Whitney Barnes from inside the two-story house the couple bought in Milwaukie.

More than wishing was working behind the scenes. Rosenberg let the seller’s agent know that the Barneses were serious; they had their loan approval and they were not flirting with other properties.

“It’s important that a seller knows a buyer won’t back out,” Rosenberg said.

There are other incentives, like appraisal protection, real estate agents use to distinguish their clients during Portland’s highly competitive housing market.

In May, homes listed for sale were the lowest level reported in the 30-year history of the Regional Multiple Listing Service (RMLS).

Adding to the long line of existing homeowners wanting to upgrade to a larger home are people from out of state who relocated since they can work remotely and a wave of millennials, the largest generation, and other first-timers ready to purchase rather than rent.

Eager buyers, motivated by a 3% interest rate for a 30-year, fixed mortgage, pushed up the median sale price in the Portland metro area last month to $515,000, a boost of $15,000, compared to April, the RMLS report showed.

Bidding wars and cash deals lead frustrated buyers to think a home is out of reach. But they may not have tried real estate agents’ top tricks to sweeten the deal to sellers, from a signing bonus to charity donation.

In Portland’s fast-paced, fiercely competitive market, Rosenberg counsels all her clients to make a strong first offer; over the asking price, if necessary.

Sometimes, she suggests they add an escalation clause, which she calls “the eBay of home buying.” The first offer rises incrementally to exceed others up to a fixed amount. “This is one way to ensure the buyer doesn’t overpay but can still beat other offers,” she said.

Rosenberg helps her clients get ahead of a potential bidding war by offering a signing bonus: The buyer’s offer is higher if it is accepted quickly, often before the busy weekend.

Another gift to the seller: A buyer pledges that if the appraised value of the property is less than the offered price, and a lender will only loan up to 80% of the appraised value, the buyer will find the cash to make up the difference in addition to the down payment.

Other ways Rosenberg’s clients rise to the top:

Love letters, in which a buyer writes a personal note to the seller, with the agents serving as intermediaries, have also been used to underscore a buyer’s strong qualifications as the property’s perfect match.

To ingratiate themselves, a potential buyer promises to care for an established garden or maintain the design of an architectural home.

Others write hoping to tug on emotions with their story of personal challenges and they include a photo, often of a family or a mother-to-be.

These communications, however, are seen as potential sources of Fair Housing Act violations and Oregon is the first state to make it unlawful for a seller’s agent to accept one as of Jan. 1, 2022.

The law prevents a seller from “selecting a buyer based on the buyer’s race, color, religion, sex, sexual orientation, national origin, marital status or familial status,” according to House Bill 2550.

“Every story was sadder than the last one,” said Jen Williams, who with her husband, Josh, received 10 love letters along with offers on their two-story house in Clackamas. “It’s heartbreaking to say ‘no’ to people.”

They said their agent, Ilyse Ball of i Realty team and RE/MAX equity group, helped them sort through offers when they were feeling anxious and overwhelmed.

They looked over a spreadsheet Ball prepared for them that included the offering price and terms. They compared the extra incentives against what would help them.

They needed to stay in the home until a certain time, so an offer for an immediate close, forcing a quick move, wasn’t considered.

In the end, they didn’t select the offer with the highest price, but what, they said, was best for their family.

The successful buyer offered no fee for the owners to stay for a time after the deal close, a five-day inspection period and a promise not to ask for any repairs. The buyer also had the ability to bring in $25,000 over the appraised value in case of a low appraisal, which didn’t happen.

“The buyers showed us they were capable financially and they were committed,” said Josh Williams.

Before they were able to buy a home in May, the Barneses walked through 80 houses since November 2020. They made nine offers, one at a time. Some of the properties went for $50,000 to $80,000 over the asking price or were cash deals, “and we couldn’t do that,” said Whitney Barnes.

She said each rejection was stressful and emotionally draining, because envisioning themselves living in the home is part of the process. “There were tears every time we’d get the call that ‘it’s not you’,” she said.

The Barneses wrote a letter that explained what they liked about the home and backyard, and that they were “100% ready” to buy.

“We made each letter short, sweet and sincere,” said Whitney Barnes. “The owners needed to know that we wouldn’t change our mind and the loan wouldn’t fall through.”

After three separate offers were not accepted, they strategized with real estate agent Rosenberg to strengthen their offer by adding “sweeteners” to get the seller’s attention and show how the deal could progress smoothly.

They promised a quick turnaround on the inspection, they would release half of their earnest money early and they wouldn’t ask for repairs under $5,000.

“Our biggest asset was a real estate agent we trusted,” said Barnes. “We knew Sophia would point out any red flags versus the easy fixes. She wanted us to buy a home that was a good fit and a smart investment.”

The couple, who are in their 30s and were living in a 500-square-foot apartment in Southeast Portland, said some home shoppers waive the inspection, but that wasn’t negotiable to them.

“It’s our first home and we needed to know what we’re getting into,” Barnes said.

They heard the seller chose their offer because their competition, who offered the highest price, had not seen the house in person. “The owners had confidence we would see this through,” said Barnes.

Another added perk: Rosenberg donates a portion of her commission, from $1,500 to $2,000, to a nonprofit of the seller’s choice. In this case, the donation went to Portland Homeless Family Solutions.

“That definitely helps us stand out,” said Rosenberg.

After six months of being outbid on homes, Whitney and Noah Barnes are settling into their home, which is larger than they expected and on a 10,000-square-foot lot.

They are installing an above-ground, galvanized-steel tank pool and adding landscaping designed to be certified as a healthy wildlife habitat by Columbia Land Trust and the Audubon Society of Portland.

“They were put through the wringer,” said Rosenberg, “but they ended up with the best house of the bunch.”